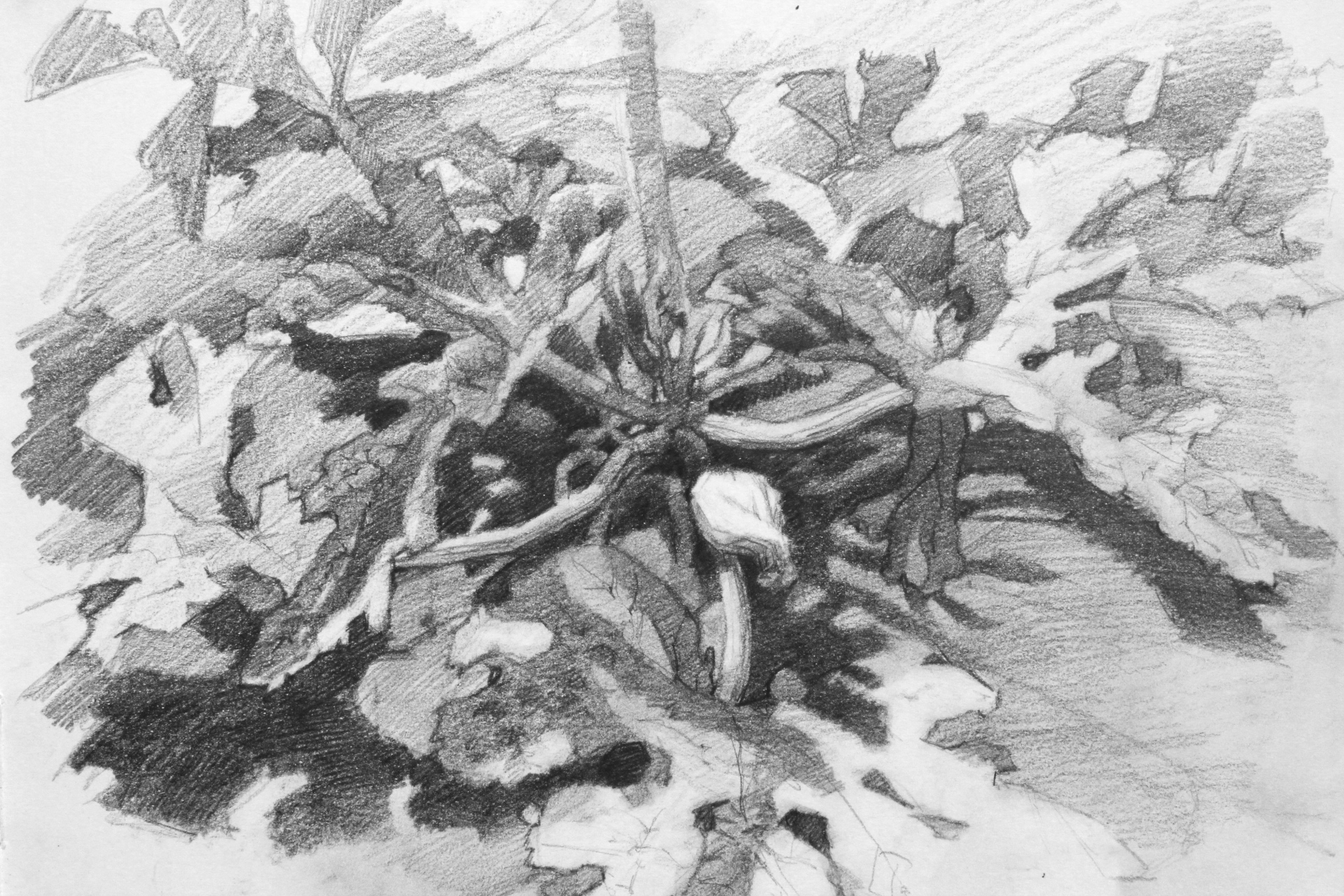 The power of abstraction

My love for details began at a very young age and until some years ago  I couldn’t imagine drawing being any fun without them. Whatever I drew as a little girl, it was the little things I enjoyed the most: the whiskers on a cat, the braided manes of a horse, the bow on a dress or the ruffles on a mouse’s apron.
When I grew older and went to high school, my interest shifted to the human figure, but my focus on detail remained. How thrilling it was to draw the shiny curls framing a model’s face or to accentuate the shadow cast by a flexed muscle, to soften the edges on a fleshy thigh and meditatively draw every single eyelash in a portrait.
However, the area surrounding the main subject of my drawing, was not my forte. The only thing  I bothered to do in order to make the background somewhat interesting was giving it a colour. I was of the opinion backgrounds were extremely boring and a necessary evil.

In that time I aspired to learn to paint like Caravaggio or Michelangelo, whose mastery of detail in the portraying of the human form was mind-blowing to me. My admiration for their work was what pushed me to enrol in the painting course of the classical art academy and funnily enough it was during those studies that my taste of and view on art changed dramatically.
Many different things contributed to my previous heroes tumbling down from their pedestals, but I think I could say there were three main factors.

The benefits of time pressure
In the first year of art school I often had to capture the complex poses of live models in less than five minutes, which made me look beyond the tempting details of the human body. In order to accurately draw the entire figure in such a short amount of time, I couldn’t just start with the head and draw all my way down to the feet, following the body contour. Instead, after months of practice, I found myself drawing not the head, the arms or legs of the model in front of me, but the directional lines of the pose, starting with the main and ending with the smaller ones. The result was not as poetic as the rounded lines I usually traced, but this structure of straight lines seemed to capture the essence of the model’s pose much better AND to allow room for adjustments.
I didn’t yet know how I had lost my obsession with the details of human anatomy, for this change in my technique happened without me being fully aware of it. It wasn’t until I started teaching, a couple of years later, that I understood I had learned to appreciate the abstract value of reality. Before, all I saw when looking at my drawing subject was a list of individual, tangible things. After, I saw the connection between every single part, for I had developed a holistic view.

Learning from a great teacher
What also helped me understand the importance of ‘the whole’, were the lessons of first year drawing teacher Peter Durieux, who opened my eyes to the world of composition. In his course I was introduced to subjects I would never have considered drawing before, like interiors and landscapes. I learned how to simplify the complexity of those subjects, to find a balance in carefully chosen blocks, to experiment with different frames and to see the benefits of using a limited amount of values instead of an endless range of them. I came to realize that the reason I found some things more attractive than others wasn’t because they were rich in detail, but because of their balance between the general and the particular, the tension between sharp shapes and simple forms, a hierarchy of strong tonal contrasts and weaker ones. In short, I started judging the strength of a drawing or painting based on its abstract power.

Admiring Sorolla’s efficiency
Finally, bumping into Joaquin Sorolla’s work had a very big influence on my artistic development during art school and afterwards. I had never imagined I would fall in love especially with his landscapes, for I had always sworn I would never like that genre. However, the way this master of plein air painting could capture the sunny atmosphere of seaside scenes, the dry hotness of summer inland and also the freshness of spring in often very much simplified, but also extremely accurate colour blocks, was truly impressive to me. It wasn’t a bit like the stiff sixteen-century landscapes I knew or the soberly coloured ones from the Hague School. Looking at Sorolla’s work, I felt like being in Sardinia, feeling the burning sun, immersing myself in the vibrant colours of idyllic beaches or walking on dusty roads ornamented by rows and rows of prickly pears. However, I wasn’t only hit by nostalgia while analysing the Spanish master’s paintings, I also realized what incredible skill it takes to paint so efficiently, to capture the atmosphere of a scene with few brushstrokes, which are placed with virtuosity AND precision under what was probably extreme time pressure, caused by the turning of the sun and changing weather.
I knew, as I saw more and more of Sorolla’s work, that I wanted to paint like he did: in the great outdoors, fast, seeking a way to depict the essential beauty of my surroundings. My interest for the detailed facial expressions of Caravaggio’s dramatically composed pieces and the heavy chiaro-scuro became too artificial to me as I developed a fondness for a more colourful and spontaneous style.

A new way of looking
Going from an infatuation with the littlest of details and a strong preference for portraits to an enthusiasm for fast brushwork and a wide range of genres, has been a change I’m grateful for.
I know now that the key to learn to appreciate any subject is by ignoring the concrete and getting through to the abstract basis of reality. It’s about learning to think less and look better.

This ‘new way of looking’ is an important theme in the drawing course I’ve been teaching for the last couple of years and I thought it would be nice to use the structure of these live classes in a series of blogposts about drawing from life.
I hope you’ll stay with me as I write about changing your drawing mindset, finding the tools to draw in an efficient and accurate way and using them to make striking compositions and beautiful artworks.

See you next time?

Featured image: Zucchini Plant, a sketch from a few years ago

2 thoughts on “The power of abstraction”