Everything is still on this Monday morning.

The beauty of the frosty winter days was not to last, instead I feel the droplets of dew holding on to my eyelashes while I look at the misty hues of the grass and the trees against the pink tinged sky.
As I walk towards the train station on my way to the studio, the pink turns to a soft orange and finally the bright cadmium of the sun blinds me, telling me the day has begun. As if responding to this message, people turn up from the corner of the street.
A woman takes out her smartphone to take a picture of the sunrise, but I know it will never capture the full beauty of this quiet moment.

Capturing moments, capturing the colours, the atmosphere around me, has been my only goal in art for many years. I never wanted my work to have a special meaning, too tell a story, otherwise than pointing out the beauty of nature.

The year before giving birth to my son, however, my view on the matter changed. I remember feeling an emptiness I could not quite grasp, until I realized I had drifted far away from the imaginative person I was as a child. That’s why I decided to start a project in which I would combine both observation and imagination making a series of large paintings based on a children’s book I would write myself. The project is now finished and the book served well as an inspiration, although it could do with some serious revising should I want to show it to anyone.
Looking back at the period I worked on these large paintings I realize learned a lot about technique, but even more about my own preferences and character.
I know now that I do not want to commit to enormous sizes anymore, but that I work best when I can finish a painting in less than a month.

Three of the paintings from the series were very large and almost entirely painted from life, using live models in a setting I had built in my studio.
The other two works, however, were a bit smaller, painted largely from imagination and also using reference photographs. They were the most fun to make! In one I altered the colours of a picture I had taken in Abelstock, an abandoned apple orchard my husband and I often visit. I added fantastic beasts, making sure they would match the colours and atmosphere of the whole. 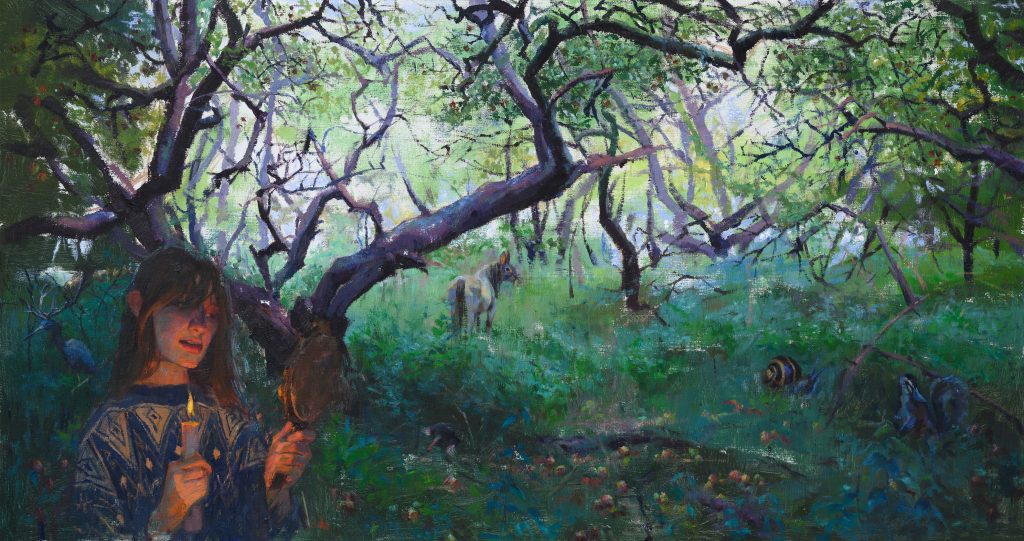 In the other I painted some gigantic snails, observing the live models well as they ‘slimed’ on my arm, and adjusting their colours to fit the composition.

I’m proud to say that Galerie Bonnard, in Nuenen, had agreed to show my works in an exhibition with Lars van Wieren, Frans Dekkers and Pieter Pander at the end of September.

In the light of my transition from non-mother to mother, I’d like my work to emphasize the beauty of having children and how mine have helped me find my inner child again. I hope I will not fail attempting to capture something so abstract and that the results won’t be too sugary.

But before getting to work, Artemisia is going to have to learn drinking from a bottle, which she refuses to do now. We’ll see how it goes…

See you next time!